Japan Clock & Watch Association estimated that total 67.2 million watches were made in Japan in 2013. Most of them (59.8 million) were exported to overseas, only 7.4 million watches were brought into the Japanese market.
There are three big watch manufacturers (Casio, Citizen, Seiko) in Japan. They dominate the Japanese market. According to Nikkei Sangyo Shimbun newspaper, the market share of Big 3 was 96.9% last year. Casio was the top supplier and their market share was 37.0% in 2013, followed by Citizen (33.9%) and Seiko (26.0%). 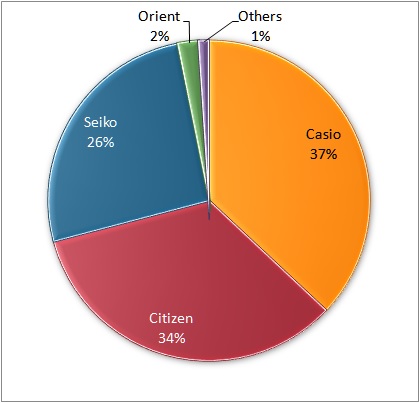